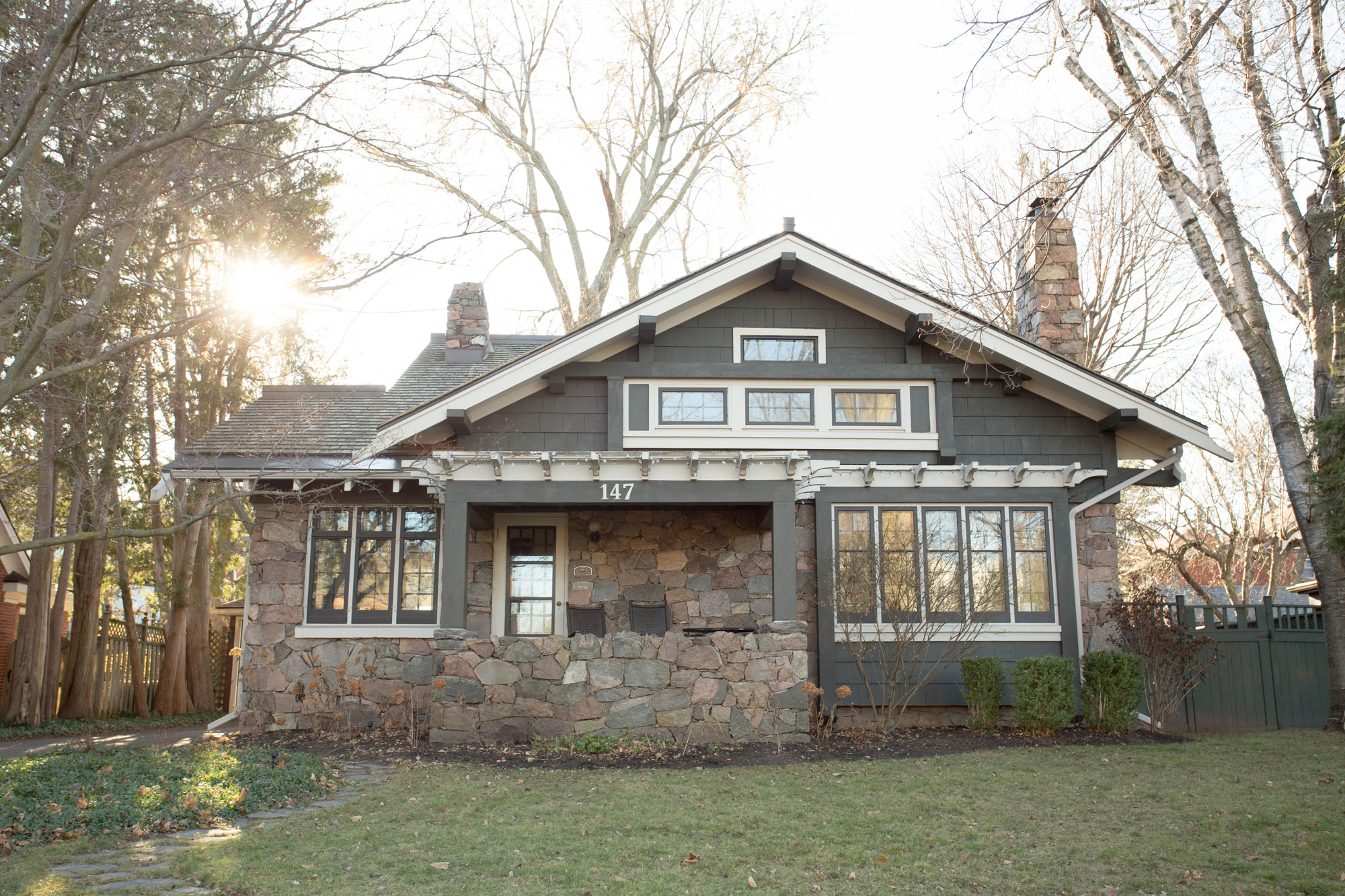 The property, 147 Avondale Ave S, Waterloo is a heritage home, designated by the City of Waterloo By-Law 92 – 39 because of its historic and architectural value and interest pursuant to Section 29 of The Ontario Heritage Act, R.S.O. 1980, c.337. Under the City of Waterloo By – Law, the home is known as “The Reitzel – Grierson House.” The home was built in 1925, designed by C.P. Mueller.

From the City of Waterloo: “Ed Reitzel was a member of a family that began a construction business in the early 1900s and later established the Reitzel Furniture Factory on Allen Street West. Mr. Reitzel was himself a house builder and used his skills to build his own home on Avondale Avenue West in 1925.

The 1.5-storey bungalow is designed in the craftsman style. That style originated in England with the arts and crafts movement, and was based upon structural clarity and composition linked with natural forms of decoration. To display the structure’s parts clearly and express their organic harmony, the designer of the Reitzel house used such visible architectural details as wide overhangs of the roof, extended fascia boards, projecting corbels under the front gable end, gable ends and walls constructed of pink granite from the Bruce Peninsula with their outer joints free of mortar. Likewise, heavy wooden posts on the front porch and pseudo rafter – ends on the front and side porches contribute to the craftsman style in the Reitzel house.”

The Waterloo Regional Heritage Foundation was first contacted by the owner’s real estate agent, Suzanne Ethier. The home had been listed for some time but hadn’t sold. The cedar roof had reached the end of its useful life and would cost about $60,000 to replace. Even though this impending expense had been worked into the price of the home, potential buyers were still put off by the potential cost and by the fact that it was a heritage home and there would be “hoops to jump through.”

Mrs. Ethier contacted the City of Waterloo to get information on what could and could not be done with the roof. They suggested she contact the Waterloo Regional Heritage Foundation to see about a grant.

A couple of months after speaking to Mrs. Ethier, the WRHF received a grant application requesting $15,373 which represented 50% of the cost of replacing the cedar shakes with a coated steel shingle that mimicked the cedar shakes. The City of Waterloo recommended replacing the roof with a sympathetic shingle material such as cedar, but because the heritage designation bylaw did not specifically mention the roof materials, the choice of materials was left up to the property owner. The owner decided to go with the coated steel because it was less expensive, would last longer and would not be susceptible to moss.

The Waterloo Regional Heritage Foundation discussed the application and did not want to see the cedar roof replaced by a steel roof. So, it granted the homeowner a maximum of $30,000 plus HST for replacement of the roof provided that the existing roof was replaced with a historically accurate cedar roof. This grant of $30,000, double the amount requested, represented 50% of the cost of a cedar roof.

The homeowner agreed to replace the roof with cedar and the work was completed within a couple of months.

This quote from the homeowner adds some valuable insight …

“My house was listed for over a year. I had well over 1300 people through it. The interest was there but potential buyers were afraid of the Heritage designation. Many potential buyers came through because of the location and curb appeal but wanted to see a ‘media room’ and an ensuite…sigh. Finally, valuation… I was there for 20 years and constantly fought with appraisers and real estate agents over valuation. A Heritage home does not fit their cookie – cutter methods of valuing based on comparables in the neighbourhood. You have to push back on them, challenge them to see the uniqueness and truly search out comparables.”

This story has a happy conclusion. The home finally did sell and closed in January of 2015. It illustrates the important role the REALTOR® played in the sale of the home, and that a Heritage property is a worthwhile investment not only in real estate but also in our community’s history …and it requires our collective stewardship.

By Real Appeal Heritage Homes No Comments
A panel of Heritage planners from Kitchener, Waterloo and Cambridge reviewed the incentives and other programs available for designated heritage properties.

The City of Kitchener provides heritage funding through their designated heritage property grant program ( 50% of eligible conservation work up to a maximum of $3,000) and a heritage tax refund program (eligible properties may receive up to a 40% refund of the taxes for municipal and school purposes).

While the City of Waterloo does not currently provide any heritage funding, (a Heritage Strategy is currently underway) we suggest that you check the Municipal Heritage Register to determine which properties are listed or designated before buying a property. Properties can be designated for architectural, historic or contextual reasons. Because of this, designated properties aren’t always obvious. Be aware of “Listed”, non-designated properties. Property owners seeking redevelopment opportunities should be aware of those properties that are listed as the list can have implications for demolition and redevelopment.

Be aware that alterations to the designated property will require a heritage permit. This doesn’t mean that changes can’t be made, but rather that there is a process in place to review proposed changes to ensure they conserve heritage features. Details can be found online or by calling heritage staff.

Suzanne Ethier, with Real Appeal Homes has sold multiple heritage homes throughout the region. Are you interested in learning more about heritage homes?

Read about more myths in the attached PDF.

Heritage homes in Kitchener and Waterloo are surrounded by myths and misunderstanding. Read through these 3 myths and learn more about heritage home ownership.

MYTH: I won’t be able to remove wallpaper or change light fixtures because my house is designated.

Read about more myths in the attached PDF.

Each brokerage is independently owned and operated.